This page sets out some of the issues relating to Colwell Brook, which originates and flows through this area. The brook is marked on the OS map as originating in a spring near Downs Road. These notes are about this initial section of the brook (highlighted in blue on the map below). It subsequently continues south and eventually carries the entire output of the Witney sewage treatment works before joining Queen Emma’s Dyke and entering the Windrush south of Witney Lake.

Witney Woodland Volunteers is licensed by WODC to develop and care for the area to the north of Range Road, Deer Park Wood. We are currently negotiating to extend our remit to the are shown on the map, and, as in the title above, referring to it as Deer Park Wood South.

History: The area shown on the map has for many years been marginal and uncared for. Since the development of new housing to the south, there is an increasing footfall and pressure for recreational use. We have observed a desire path being established directly from Alice Batt Road.

– We are keen to maximise the public utility of this area. We consider that flash flooding is the major impediment to the aim.

– Our major concern is that surface water gullies from the large industrial estates to the north enter the brook directly, carrying pollution, with no attenuation.

– Our observation is that the large balancing pond built to attenuate surface water appears to have little observable function. 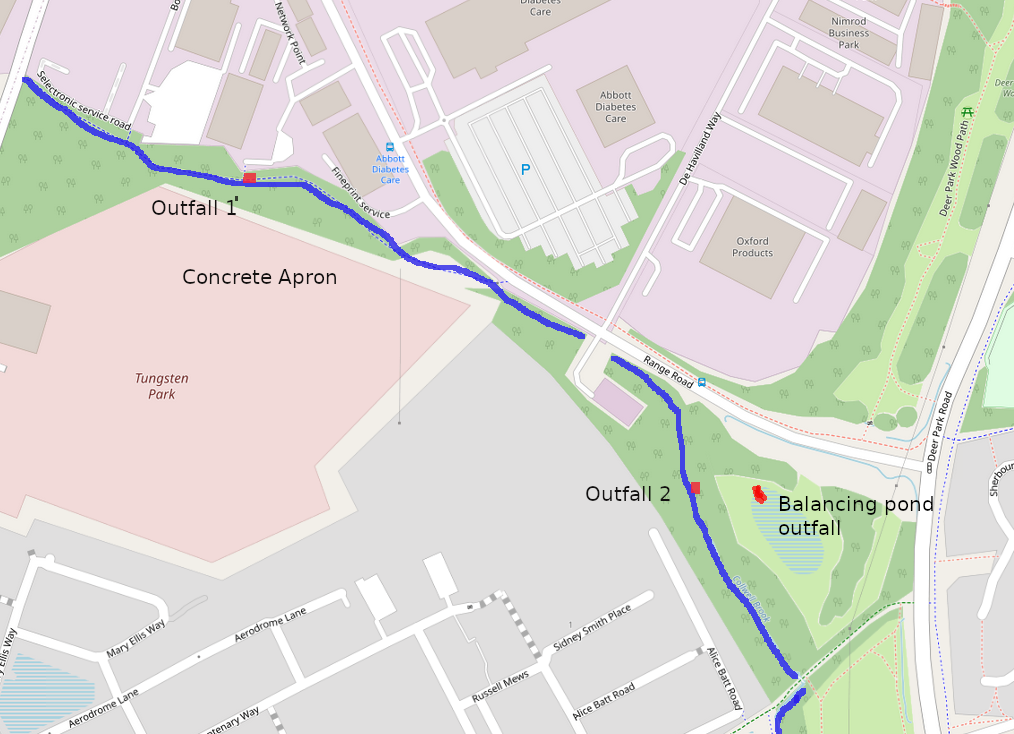 (Additional input to the brook after rain or snow melt is the entire runoff from the very large concrete apron of the new industrial buildings on Tungsten Park. This runoff is attenuated, but not very efficiently.)

# 1 by the concrete apron (location map)

# 2 in the woodland area (location map)

We have found that it is the output from these two outflows which is the main source of flooding. Their output appears to be completely unattenuated, and we have had additional concerns that they carry pollution into the brook (see below).

There is also a large balancing pond, shown cross-hatched in blue on the map below, which we presume was built to attenuate the surface water from the industrial estate. This, paradoxically, does not seem to receive much flow, and the large surface area of the “pond” is overgrown by shrubs and trees, and at most times of year is completely dry. At times of prolonged rain in winter, there can be patches of standing water a few inches deep, but the installation gives the impression of being over-engineered.

When we first started to survey the area, we noted the immense impact of flash flooding south of the balancing pond. Large areas were inundated because of the build-up of brash at various pinch points along the stream. Originally, we put this down to the impact of the earthworks and tree/shrub clearances going on during the construction of Tungsten Park upstream.

We have spent many person-hours clearing the brook over the last two years, and indeed have noticed that members of the public have also worked to keep it clear.

The main paradox confronting us: the major cause of flooding is runoff which is not directed to the balancing pond, but is discharged directly into Colwell Brook. The other problem is that the runoff coming into the brook is not just rainwater, but pollutants which should not be discharged into a watercourse.

We are currently surveying this pollution, and our most recent observations were motivated by the unusually bad smell recently noticed by the brook. We did not discover the source of this, but did find evidence at both outfalls of pollution, described below. 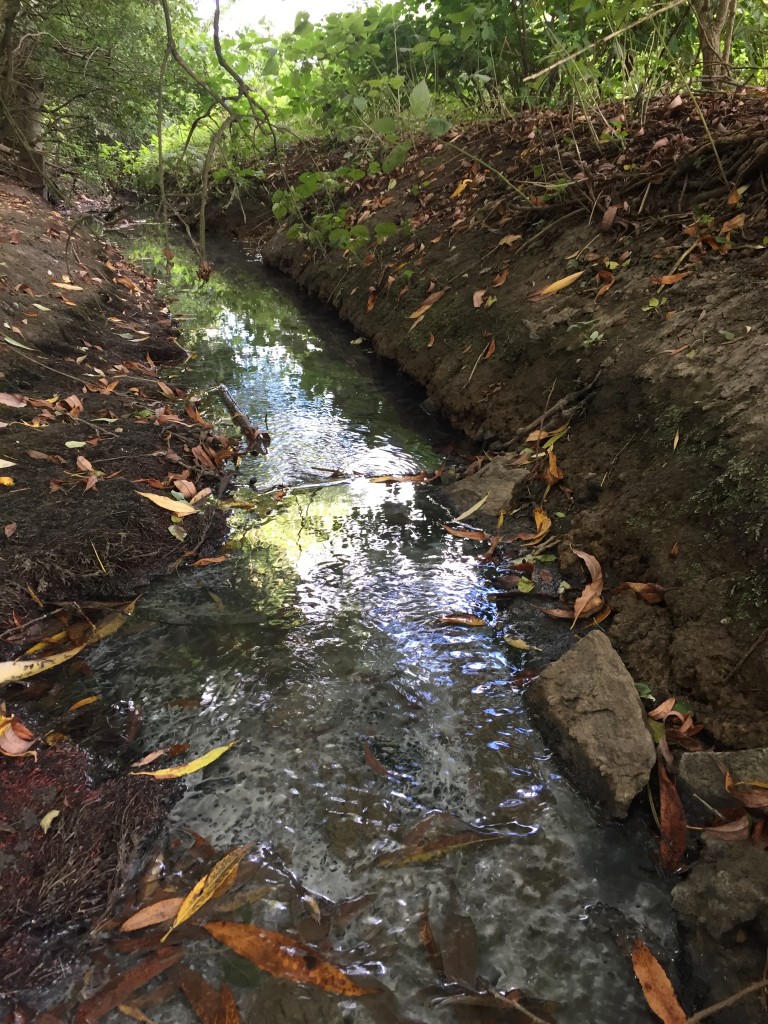 This image taken downstream of the outfall shows a white sludge. This is not present upstream. 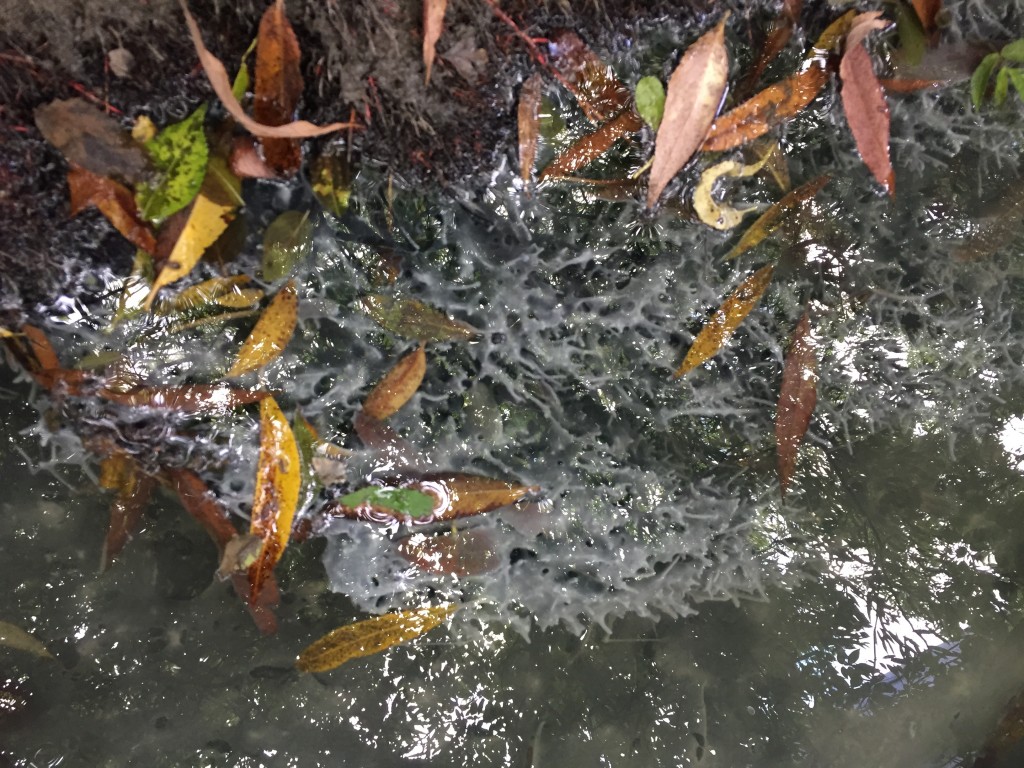 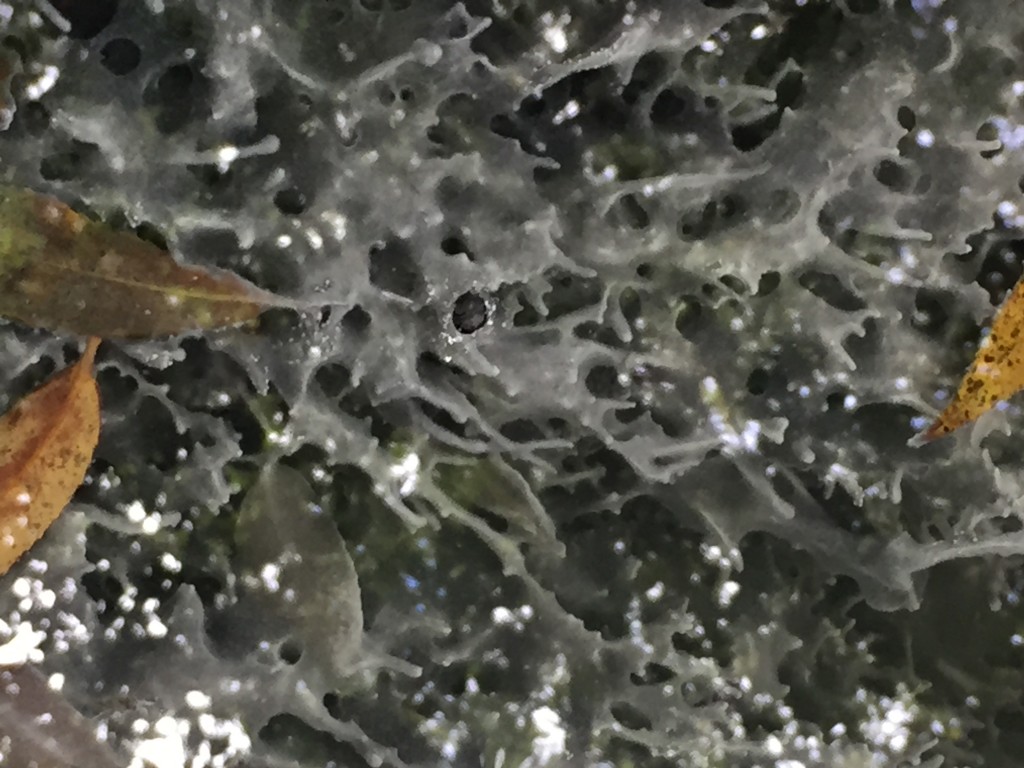 This white sludge was not sampled when these images were taken, and had been washed away when we returned on the 27/09/2021.

However, at this time, sample 5 was taken of the deposits at the outfall, which is stored in a freezer. The video shows the relatively large contribution of this outfall relative to the brook at this point.

This area also shows signs of large surges, with flattened vegetation and a ‘tide mark’ and black deposits visible.

Again, a sample was taken and stored in a freezer. Both the videos above were taken after the flooding caused by rainfall the previous night.

This is the highly engineered structure which we initially assumed handled the runoff from the industrial estate.  The video (taken at the same time as the two above) shows that the flow here is much less.

Conclusion: we are extremely concerned that the brook is regularly overwhelmed by completely unattenuated runoff (with attendant pollution) whilst the large balancing pond is totally underused.