We are very aware of what people in Witney throw away or simply drop without a second thought. We clear and cut back around 20 paths around the town, and among the masses of fast food containers, bottles, cans, wrappers, used cat litter and so on, we sometimes find more unusual items.

I’ve just handed in three chunky live bullets to the police – they were found whilst clearing rubbish from paths and woodland edges alongside the river Windrush. 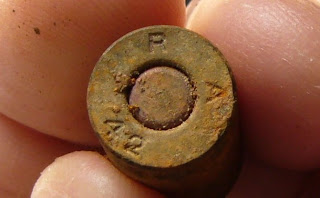 On the same day we also found a driving licence and a handbag (probably discarded after a robbery) complete with credit cards but no cash.

The bullets were in a rusty old tin: 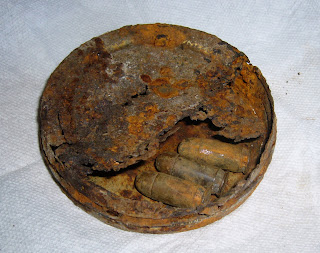 …quite possibly a wartime relic that had become an embarrassment.

…but usually Monday mornings are more predictable than this!

One of the challenges in being an active member of a group is that when I’m taking photos I feel as if I’m being an onlooker, an observer rather than a participant. So I admit to a somewhat guilty feeling when I’m adding to our online gallery of our exploits:

…and conscious that a “before” picture does not convey the often enormous amount of litter which becomes evident when weeds and shrubs are cut back from the side of paths.

But we persevere. And we do believe that our impression – of Witney being a less littered town than ten years ago – is valid. We really do believe that our efforts over the years have made a difference to people who might now think twice about dropping something without a second thought. Even to people without any sense of civic pride, the thought that they are doing something which is not as “normal” as it used to be. We live in hope!